One year ago I wrote a post about Tibetan thangkas and mentioned therein a Christian ministry that was selling Christian thangkas, though at the time I didn't know anything more about how they were being used.  In today's post, I am excited to provide some more information about them.

Back in 2001, some expatriate workers in the Himalayas puzzled over the repeated lack of effectiveness of more common approaches to reach Tibetan Buddhists for Christ, so they began to seek alternative ways of presenting the Gospel that would connect more directly with Tibetan Buddhists.  They formed a group called The Tibetan Storytelling Project (TSP) to address this concern.  The group eventually decided to produce an evangelistic DVD which would utilize traditional Tibetan art, songs, choreography and rhythmic speech in presenting the Gospel.


Two years later the TSP discovered The Hope DVD, produced by Mars Hill Productions.  Much of the dvd's content mirrored what the TSP had already decided to include in their own project, so they worked out an agreement with Mars Hill to use the Hope DVD material which would allow the addition of fresh footage shot on the Tibetan Plateau using Tibetan extras.  These additional scenes portray a traveling Tibetan storyteller and his daughter, who use traditional Tibetan paintings called thangkas to illustrate stories from the Bible, as well as performances of Tibetan music and dance.  The two-hour Tibetan Hope DVD was completed in 2007. 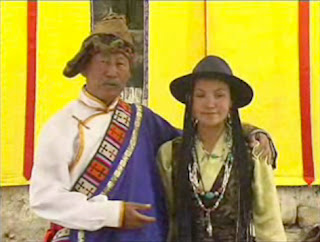 Some of the new scenes show the Tibetan storyteller, explaining biblical stories depicted on four traditional thangka paintings.  The TSP writes that


the HOPE storyteller is NOT a traditional Buddhist storyteller (Lama Maniwa).  Choemphel in the DVD shares certain of the same features, as he is a travelling storyteller, using thangka paintings, a pointing stick and selected rhythmic speech sections, but here the similarities cease. The HOPE storyteller has no altar with Buddhist offerings. Instead, he carries a Bible, wrapped in a cloth and relates his own experience as part of his story. By contrast, the role of the Buddhist maniwa, sometimes called lama maniwa, includes reciting the mani prayer correctly and relating well-known supernatural tales of Buddhist origin. Most maniwa were lay people who wore distinctive dress, including maroon robes similar to monastic clothing. Choemphel does none of these things.

A thangka is a traditional, stylized Tibetan form of painting that is painted or embroidered on silk, and is often mounted on a silk frame.  The thangkas portrayed in the DVD demonstrate a style used in story-based teaching, which was traditionally used to teach Buddhist doctrine and moral truth.  This style of thangka shows several scenes in a story, all in the same painting. The modern biblical thangkas produced by the TSP are printed posters and are intended to be used alongside the Hope DVD, or by themselves, by a trained presenter.  The TSP has produced an excellent 14 page manual to explain the background of the biblical thangkas and how to use them correctly to explain the Gospel.  The manual not only explains the meanings of thangkas, but, along with the DVD, provides powerful ways of communicating the Gospel that will help to avoid misconceptions common to people raised in Tibetan Buddhism and open their eyes to the wonderful saving grace of Jesus.

I was provided with some accounts of the use of this series of thangkas among various ethnic groups in various parts of Asia.  Here are those stories:

[A believer in SW China] shared the Thangkas with a group of Tibetans in a village for a couple of hours. One guy in the back was talking and smoking a lot and not paying too much attention, but later he started to listen to the stories more and became very interested. Eventually he believed and learned to tell the stories on the Thangkas himself.

"We are actually going to a village tonight where we have shared the Gospel now two times using these posters. They are very useful and the pastor who is sharing the story said that these can be used both to proclaim the Gospel and also to teach believers. We have done one poster /evening so we will most probably have two more times there and then we see what happens after that. I am using these posters with a young family where the father is a believer and the mother most probably believes in her heart but has not clearly professed faith in Jesus."

"I have (used them to teach), and people are very responsive.  They enjoy listening to the Bible passage story in conjunction with pointing to the Thangkas, and accept it readily as "This is Tibetan‚" together with a clear message that is Christian.  This in and of itself is a key step forward.  Suffice it to say that I have seen the effect be to link the sense "this is Tibetan‚" with "This is Christian‚" in a way that surprises them, but in a positive way."

Here is another story from a Christmas celebration in a really Tibetan area in which these thangkas were used. The writer is not a mother tongue English speaker– she is southeast Asian. She cannot be more explicit about places because of restrictions–

"I have experienced sharing using thanka, when I newly stayed in [a remote, high altitude, regional town].  It was on Christmas celebration.

[A] few weeks before the party, we [prayed] seriously, even fasting! Because we got limit[ed] permission to stay in [this town]. To our surprise, a local family open[ed] their house for the celebration.  There were adults too (the owner of the house, and a [local] teacher).

When I started telling the story, showing the thangkas (Genesis to Revelation), the [local] teacher stood up helping translating into [the regional] dialect!!!  We really felt FATHER's presence!

The thangkas were shown around. As they wanted to look at it again and again. We also shown a bit of [Jesus] movie, when [Jesus] was on the cross! Before we left, the owner of the house asked us whether we have extra thangkas.  We were sorry we didn't have extras.  Anyway, we gave them some copies of J movies."

In addition to the use of the Christian thangkas for evangelism, the ministry website offers other resources for Tibetans, such as Tibetan Christian music, testimonies, the Bible in Tibetan, and live chat and email follow up for believers or seekers who have further questions or need prayer.
Posted by hmsarthistorian at 10:31 PM