Not sure how significant this is, but... 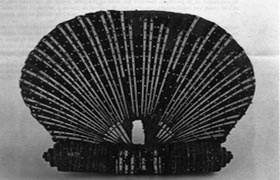 Cuba has borrowed from the Vatican's Missionary Ethnological Museum the oldest piece of indigenous Christian art of the New World to be exhibited for a year at the Museum of the City in Havana.

The piece, a wooden lectern or reading stand that dates back to the late 15th century, was brought to Cuba at the request of Havana's Historian Eusebio Leal Spengler to the director the Vatican Museums who obtained an exceptional permission from His Most Reverend Cardinal Tarcisio Bertone, Secretary of State.

The piece was carved by Cuban indigenous people in the shape of a shell and inlaid with fine strips of fishbone and tortoiseshell in the form of a fan, laid in way to create a chiaroscuro effect.


You can read the full article here.
Posted by hmsarthistorian at 12:28 AM No comments:

A History of Christianity in Indonesia

One book that I would love to own is A History of Christianity in Indonesia, edited by Jan S. Aritonang and Karel A. Steenbrink.  However, at over $200 a copy, I won't soon be getting it,  but Google Books has an abbreviated copy online for reading.  This includes my specific area of interest: chapter twenty, "Christian Art in Indonesia" (at approximately 25 pages in length).  The first part of the chapter seems to focus on European-commissioned contextualized art produced in the 20th century prior to 1940.  The second part of the chapter focuses on individual Indonesian Christian artists of the last 30 years of the century.

I thought I would share a few examples.  The first is Drawing of the Trinity by Raden Mas Poerwodiwirjo, made sometime between 1920-1924. 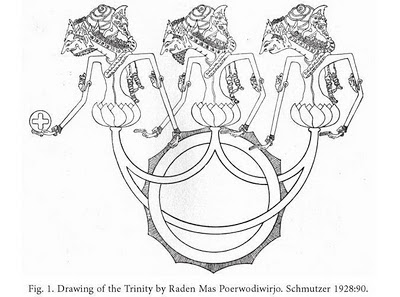 Read more »
Posted by hmsarthistorian at 12:07 AM No comments:

New Book: Christian Themes in Indian Art from Mughal Times to the Present 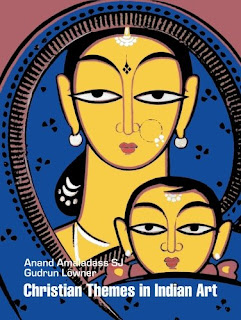 While I'm working on a short history of contextualized Christian art in India, I came across this recently published book titled Christian Themes in Indian Art from Mughal Times to the Present.  Sounds like a really comprehensive volume (428 pages), so I took the plunge and ordered a copy from India (see more on ordering info below-- you can get it cheaper than Amazon).  Here are the highlights from the online description:


This book is a pioneering work, showcasing Christian themes in Indian art from the beginnings of Christianity in India till today. The authors have, in the main, death with paintings and sculptures, but have supplemented this with one chapter on architecture, particularly that of church buildings, and one on popular art, including stamps. Around 1,100 rare colored illustrations make this publication a unique reference book. It is the first complex treatment of the theme done in the last 25 years. Special emphasis is givin to artists who as Hindus, Muslims and Parsees have chosen to paint Biblical themes...

The authors always give a short biography and then highlight hi/her works connected with the theme... Christian artists include the late F.N. Souza, who simultaneously hated and loved his Christian childhood God, and artists like A.D. Thomas, Angela Trindade, A Fonseca, V. Masoji, F. Wesley, C.J. Anthony Doss, Alphonso Doss, S. Raj, and J. Sahi, all who stand for the attempt to incorporate the Christian gospel into the Indian culture. This original research includes many young talents. An extensive Bibliography, Glossary and Index make this book a real reference source for many years to come.

I would suggest ordering the book on bookfinder.com, rather than Amazon.  However, beware that for copies shipping from India, the shipping charge may be revised upon ordering to approximately $45 due to the weight of the book, which you will be asked to approve first.
Posted by hmsarthistorian at 10:17 PM No comments: 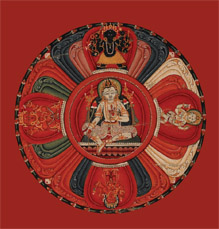 Just saw this announcement about an upcoming lecture on Monday, Jan. 23, 7:30 p.m. at the Michael C. Carlos Museum at Emory University in Atlanta, in case any of you in that area would like to check it out.  It's a part of the current exhibition titled "Mandala: Sacred Circle in Tibetan Buddhism".

"Christian Luczanits, Curator at the Rubin Museum of Art, will discuss Dimensions of Sacred Space: Mandalas in Early Tibetan Buddhist Art and Architecture. The monuments of the Western Himalayas dating from the 11th to the 13th century are rich in information on the mandala, its development and different forms of usage. Presenting a range of examples from these monuments—in murals, sculpture, and architecture—this lecture will introduce some of the key notions underlying the practice of the mandala in the Buddhist context. From the depiction of the ritual specialist using a mandala altar to the furnishing of architecture to transform it into a three-dimensional mandala the visitor enters by walking into the temple the western Himalayan monuments account for different dimensions of sacred space all of which are intimately connected with the mandala."

Posted by hmsarthistorian at 10:05 PM No comments: 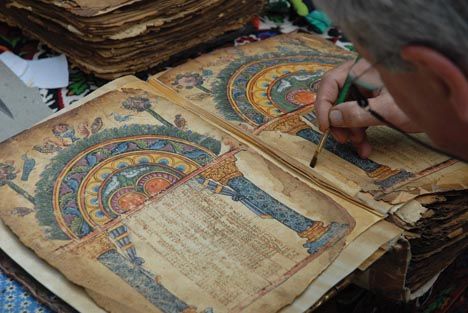 Here's an interesting story from last year, detailing the preservation in 2006 of two Ethiopian Orthodox manuscripts called The Garima Gospels.  In 2010, the Gospels-- originally believed by western historians to have been created in the twelfth century-- were radiocarbon dated to between 330 and 650AD.  This makes them the second oldest complete copy of the Gospels in the world, after "the Codex Sinaiticus, a copy of the Bible hand-written in Greek which dates back to the third century. Unlike the Garima Gospels, the Codex includes large chunks of the Old Testament, but the entire work is divided between museums and monasteries in Egypt, Britain, Russia and the USA" (The Independent).  The Garima Gospels pre-date all other early Christian texts in sub-Saharan Africa by more than 500 years.  In the second volume, another 14th century Gospels was also included. 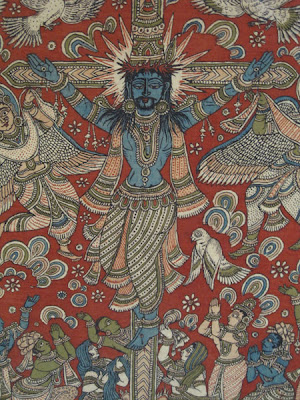 Here's a recent exhibition that I wish I could've seen-- "Christian Folk Art from India" at Augusta Savage Gallery at UMass from December 12 - 16, 2011, where

In the 20th century, they occasionally used their traditional motifs and techniques to portray Christian subjects.  Also included in the show are works by Christian Indian artist Frank Wesley, as well as other Christian artworks and artifacts such as brass crucifixes, clay creches, posters, and other objects.

The works in the collection are owned by Georgana Falb Foster, 83, an independent scholar of South Asian studies and member of the American Council of Southern Asian Art.  In the 1990s, she gave the collection to the Museum of Art at the University of Iowa as a research collection.  She has given papers at the Conference of South Indian Religion and the Wisconsin South Asian conference and is a co-author of a chapter on the pilgrimage to the popular goddess Vaishno Devi in Jammu in "Sacred Geography of Goddesses in South Asia" Scholarly Books (2010).

Posted by hmsarthistorian at 11:35 PM 3 comments: