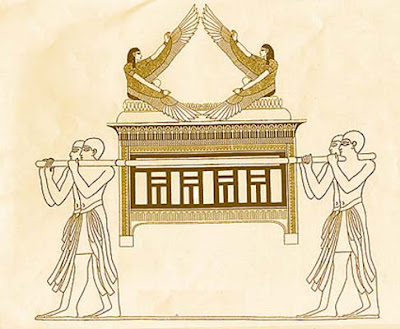 Raanan Eichler, a Ph.D. researcher and occasional instructor in the Department of Bible at the Hebrew University of Jerusalem, has written an illustrated article on the biblical cherubim in Tarbiz, the leading Jewish studies journal in the world.  In it he compares the descriptions of the cherubim on the Ark of the Covenant and Temple with similar beings in Egyptian-Canaanite iconography, as well as Egyptian parallels to the Ark itself.

Read more »
Posted by hmsarthistorian at 12:16 AM No comments:

Links to this post
Email ThisBlogThis!Share to TwitterShare to FacebookShare to Pinterest
Labels: Ark of the Covenant, Cherubim, Raanan Eichler, Tarbiz, Temple

A Brief History of Visual Contextualization in India: Mughal Art


Continuing with my series on visual contextualization in Indian art, I'll now turn to a another chapter in India's art history: Mughal Art.  The Mughal Empire was an Islamic ruling power in India from 1526-1858, although its "classic period" lasted from 1556-1707.  At its height, it controlled most of India, and parts of Pakistan, Bangladesh, and Afghanistan.  Besides trusty Wikipedia, I also will also be referring to Crossing Cultural Frontiers: Biblical Themes in Mughal Paintings by Som Prakash Verma (or more information about the book, see Amazon).

Read more »
Posted by hmsarthistorian at 3:01 PM No comments:

Posted by hmsarthistorian at 10:34 PM No comments:

Supper at Emmaus by He Qi

He Qi (pronounced “Huh Chee”) is a contemporary Chinese Christian artist that paints primarily biblical themes and scenes. However, he combines these stories with Chinese cultural elements drawn from the colorful folk art of the Chinese countryside, and rural Tibet. In addition to these sources, he also references the iconography of the Western Middle Ages and Modern Art. If you aren't familiar with his art and story, click here to read more about the symbolism in his work and his own personal journey.  You can also read more about him at a previous post of mine here.

Posted by hmsarthistorian at 11:14 PM No comments:

On the Road to Emmaus 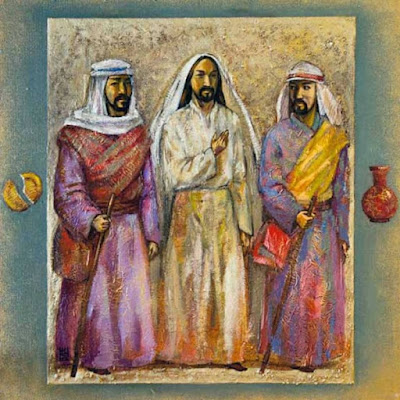 Here's an image of Jesus and the two travelers on the road to Emmaus (Luke 24:13-35), by Kazakhstani artist Nelly Bube.
Posted by hmsarthistorian at 10:54 PM No comments:

In between posts this week, I thought I'd share some Resurrection-themed artwork.  This is a detail of an illustration from a Syriac Gospel Lectionary from northern Iraq (1216–20), titled "Holy Women at the Tomb."

The image of the Holy Women visiting the tomb of Christ illustrates the text of St Matthew, in which he recounts that at dawn on the first day of the week St Mary Magdalene and the other Mary went to the tomb and saw an angel, who said to them: "Do not be afraid, for I know that you are looking for Jesus, who was crucified. He is not here; he has risen, just as he said." (Matthew 28:5-6).

The manuscript shows a strong Byzantine influence in the choice of texts and style of illustrations. However, many of the details of the illustrations, such as trees, rocks, architecture, and much of the clothing, are Islamic in style.


I LOVE the colors, the stylized plants, the beauty of the written Syriac script, and the fact that it combines images from the Bible with two different stylistic sources, Byzantine and Islamic art.  If I understand correctly, the modern Syriac Orthodox Church and Syriac Catholic Church in Iraq both employ "the oldest surviving liturgy in Christianity, the Liturgy of St. James the Apostle, and [use] Syriac, a dialect of Aramaic spoken by Jesus Christ and his Apostles, as its official and liturgical language."

More information about the image can be found at the British Library website.

Posted by hmsarthistorian at 7:57 PM No comments:

Have a Blessed Easter


"Since the children have flesh and blood, he too shared in their humanity so that by his death he might destroy him who holds the power of death—that is, the devil— and free those who all their lives were held in slavery by their fear of death."  Hebrews 2:14-15
Posted by hmsarthistorian at 11:40 PM No comments: 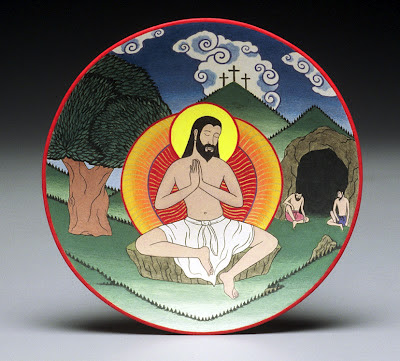 Here's my Good Friday image of Jesus praying in Gethsemane, from a ceramic bowl I made some years ago.  It's based on the style of Tibetan paintings called thangkas.  May we remember today that Jesus came into this world to call lost sinners and give us abundant life in him.
Posted by hmsarthistorian at 7:21 AM 2 comments:


Here's a great image and sacred art resource by way of W. David O. Taylor at Diary Of An Arts Pastor.  It's a website by John A. Kohan called Sacred Art Pilgrim.  Kohan writes: "This website presents works from my sacred art collection with meditations and religious texts in ways, I hope, [that] will bring image and story together, as they were meant to be, and help us to see once again with the eyes of the heart."  It has a great selection of biblical art from various time periods and parts of the world, arranged by theme, passage, or meditations about specific artists' work.

Kohan is a former TIME Magazine correspondent and an artist himself.  He has journeyed all over the world studying and creating sacred art.  He hopes to one day establish a sacred art museum, which would both host a permanent collection as well as send out "satellite shows to churches and educational institutions across the country."
Posted by hmsarthistorian at 10:56 PM 1 comment: