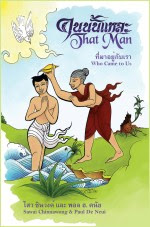 I recently came across a new book called That Man Who Came to Us by Sawai Chinnawong and Paul DeNeui.  From the back cover:

That Man Who Came to Us tells the story of the life of Jesus Christ through traditional Thai art. Featuring black and white line drawings inspired by an art form born in northern and central Thailand, That Man tells the story of Christ as fully God, yet fully human. Artist Sawai Chinnawong employs the regions’ popular distinctive artistic style originally used to depict Buddhist moral principles and other religious themes.


That Man includes a very short sentence describing each of the 45 drawings, plus a Bible passage reference, in both English and Thai.  In the back of the book are thumbnails of each drawing with a short description, including (in some cases) descriptions of cultural references in the artwork, which I found very interesting.  For fans of Chinnawong's art, I'd also recommend The Christian Story: Five Asian Artists Today and Christ on the Bangkok Road: The Art of Sawai Chinnawong.

Sawai Chinnawong is a member of the faculty of Payap University at Chaing Mai, Thailand, and is a minister of the United Church of Christ in Thailand.  He was born in Burma and moved to Thailand with his family as a young man.  Formerly Buddhist, at age 23 he became a Christian while studying art in a vocational school in Bangkok. 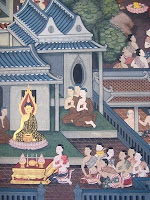 Chinnawong's love for art began when he was a child in Thailand when he saw some old men painting on a Buddhist temple wall. He says he would watch them for hours each day. His interest in art persisted into adulthood and after entering seminary at Payap University, he began creating liturgical art and designed the artwork for the chapel there.  His work has been exhibited in Asia, Sweden and the United States, and he was one of five artists chosen for the Summer of 2007 exhibition "The Christian Story: Five Asian Artists Today," held at the Museum of Biblical Art (MOBIA) in New York City in 2007.

This brings up an interesting discussion about the contextualization of visual art.  According to Volker Küster in The Christian Story: Five Asian Artists Today, there are two basic forms of visual contextualization: the Accommodation Model and the Inculturation Model.  The Accommodation Model employs a static concept of gospel and culture, and their relationship with one another.  Another name for it is the “Kernel and Husk” model.  What it means is that the Gospel is the kernel, which is then covered by different cultural "husks"-- i.e., the cultural form and Christian content remain clearly separated.  Take the following examples: 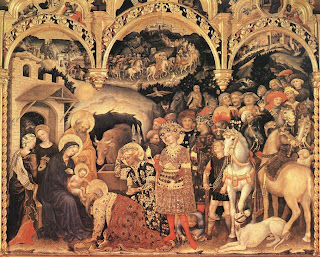 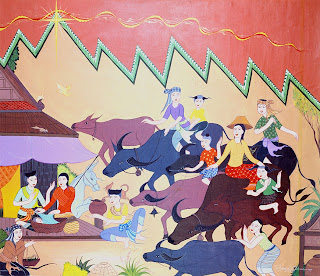 In these two examples, the top one is Gentile da Fabriano's "Adoration of the Magi" altarpiece from 1423, and the bottom one is "The Nativity" by Chinnawong.  Notice how both share a similar composition, and how Chinnawong's painting is essentially the same image, only with Thai elements.  In depicting a biblical narrative, the Accomodation/Kernel and Husk model often transposes it to an indigenous setting, but still utilizes European compositions.  A western Christian could look at Chinnawong's painting and be able to tell what story it is depicting, but not necessarily so for a Thai Buddhist.

With the Inculturation Model, there is a more dynamic view of Gospel and culture.  Also called the Onion Model, it represents a fusing of form and content, where the Gospel infuses the culture and can't be peeled away.  Küster cites Nyoman Darsane's paintings as an example of this model of art; he is a Balinese artist that I featured in one of my earlier posts.  Many of the concepts/images in his work would be familiar and recognizable to a Balinese, but probably not to a western Christian.  Küster mentions one of Darsane's paintings from that post as an example of this model: 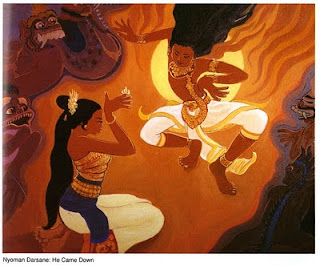 I find that these two models are very helpful when looking at indigenous Christian art, because they can help the viewer understand the level or degree of contextualization that has occurred (depending on how familiar she is with both western art and the particular indigenous art form and culture).  Küster seems to imply that the Inculturation model is superior to the Accomodation model because it represents a truer fusion of culture and Christianity, and therefore is to be preferred.  Generally, I agree with that assessment.  One point at which I would disagree is when it comes to some indigenous art forms, particular narrative figural art forms, such as Chinnawong's.  That is because I suspect that Küster may find narrative art to be somewhat "western" and therefore he rejects it in part or whole as a legitimate vehicle for depicting biblical stories among nonwestern cultures.  I would caution that such forms should not be rejected as foreign/western simply because they are narrative, if that art form previously existed in the culture prior to western or Christian influence from the west.  On the other hand, as Küster points out, such art forms do lend themselves more easily to "accomodating" western influences, which can in some cases lend a foreign flavor to them and the Christians who embrace them.  If western influences are a stumbling block to the Gospel, then they shouldn't be used. 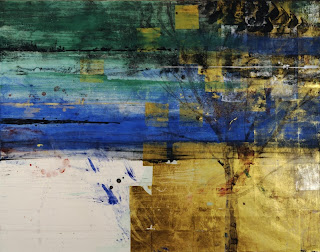 And yet, in much of nonwestern Christian art, there is a continuum from accommodation to inculturation, and many artists move freely between the two as needed or as inspired.  Both Chinnawong and Darsane are artists who do this (regarding Darsane's use of accommodation, see The Christian Story: Five Asian Artists Today, p.61).  In fact, I would guess that most Christian artists with ties to nonwestern cultures probably borrow and mix forms and techniques from both east and west.  For example, Japanese American artist Makoto Fujimura combines the ancient Japanese Nihonga tradition with his own personal abstract expressionistic style, while seeking to explore a biblical world view in the process.
Posted by hmsarthistorian at 5:07 PM