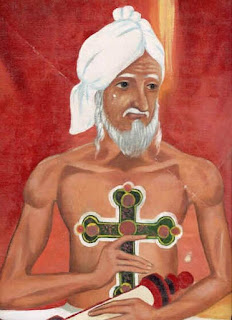 For this installment in my series "A Brief History of Visual Contextualization in India," I'll be discussing India's first Christian community, the Saint Thomas Christians (or "Nasrani").  Saint Thomas Christians traditionally live in the southwestern coastal state of Kerala and descend from a union of the local Indian population with a Jewish diaspora community, who had become Christians in the earliest days of the faith.  The Saint Thomas denominations use a Syriac liturgy in their church services and trace their spiritual heritage back to the assumed arrival of the Apostle Thomas ("Doubting Thomas") in southern India in 52 A.D.  In the third century, Nestorian Christian missionaries from the Church of the East in Persia began to settle in Kerala and organize the churches there according to their beliefs and liturgy.  Later in 1665, due to religious pressure from Portugese Catholics, the Saint Thomas Christians began to split into various factions along Catholic/Nestorian lines.  Today, this schism has resulted in several different Saint Thomas denominations, including Nestorian, Catholic, Orthodox, and even (since 1961) Evangelical!

The cross has been an elemental symbol for Saint Thomas Christians for centuries, and in India it represents a fusion of Syriac Christian and Hindu concepts.  The symbolism of the cross gained prominence in the Syriac tradition earlier than in the other church movements, where it was used to decorate Christian tombs in the Near East as early as 250 A.D.  Prior to the arrival of the Portugese in 1498, there were no anthropomorphic representations in Saint Thomas Churches.


An early example of the Christian cross in India is a granite cross from the Saint Thomas Mount in Chennai, India, where the martyrdom of St. Thomas is said to have occurred.  This Saint Thomas Cross (or Nasrani Cross) was discovered in 1547 by the Portugese as they dug the foundation of a new chapel at an older church site.  The Portugese were unable to read its inscription, and assumed that the cross came from the time of the apostle's martyrdom.

This cross has since been dated to the eighth century, and the language of its inscription has been identified as middle Persian.  It reads: "My Lord Christ, have mercy upon Abias, son of Chaharbukht, the Syrian, who cut this." Alternatively, the ending phrase may also be translated as "who preserved this."  M. Thomas Antony writes "CPT Winkworth’s interpretation of the inscriptions suggest that the Mount Cross was re-erected by the inscriber...  That means, the cross without any inscriptions was already there, and [Abias] found it and preserved it– [he] put it up. Putting an inscription around a cross is not a meritorious act, but setting up a cross or preserving a neglected cross is definitely a meritorious act."


The arch over the cross, reminiscent of Buddhist or Hindu art, is called a thoran.  In Hindu temples a thoran frames the depiction of a deity.  In the case of this Saint Thomas cross, the thoran consists of two aquatic monsters from Hindu mythology (called makara), facing each other from atop column capitals (the same capitals can be seen in Hindu temples in Kanchipuram on the southeastern Indian coast, and also date from the eighth century).  On the Saint Thomas Cross, the left makara spits water into the mouth of the makara on the right, forming an aquatic archway that symbolizes the journey of the sun through the sky. 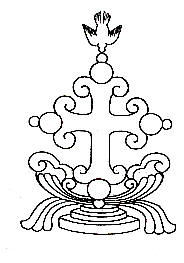 The empty cross itself stands for the resurrected Christ, with the flowering ends of the cross embodying new life to the four ends of the earth, while the dove represents the Holy Spirit.  The lotus beneath the cross symbolizes Indian civilization, into which the Christian faith was received.  In Asian religions, the lotus is a symbol of divine beauty and purity: though rooted in mud it blossoms into a beautiful flower. The flower is claimed as an important symbol by Buddhism, Hinduism and Taoism, with various philosophical and/or divine associations within each movement/religion.

The three-stepped base upon which some St. Thomas crosses rest represents Golgotha.  Because Saint Thomas Christians lived in such close proximity to both Muslims as well as Hindus, it is possible that they decided not to depict the Trinity or saints in their churches and artwork in order to avoid confusion or offense to either group.


The use of the dove above the cross is found contemporaneously outside India, therefore connecting the imagery of the Saint Thomas cross to the wider Syriac/Orthodox world at the time.  One example is the on the marble sarcophagus of Byzantine Archbishop Theodore in Ravenna, Italy, c. 677-688.  Another is the sarcophagus of Aelia Galla Placidia (392-450), the daughter of Roman emperor Theodosius.


The flowing shapes between the cross and its base on the Saint Thomas cross have been interpreted not only as a lotus flower, but also as gushing water.  Jyoti Sahi (1998: 30) writes that the water symbolism of this cross is probably linked to the waters of baptism, as well as to the water which flows beside the tree of life in the book of Revelation.  The connection of water beneath the cross to the the River of Life in Revelation also reinforces the identification of the Saint Thomas Cross as a tree of life.


Wing-like motifs at the base of crosses appear also in Armenia during this time, on stone cross carvings called khachkars.  These "wings" appear to be some kind of palm branch, tying it into the image of a tree of life as in the Syriac tradition.  Here is a modern khachkar unveiled in 2009 in Poland which also shows a dove above the cross, although this is not a common motif on ancient or modern khachkars.  I am going to have to do a separate post on khachkars in the future.


Now back to India.  Another type of cross used by the Saint Thomas churches is an open air stone cross called Nasrani Sthambams.  These granite crosses are the outdoor counterparts to the indoor crosses, like the one discussed above.  The open air crosses are typically located to the west of the church building, some of them more than 30 feet high.  The crosses themselves are composed of four separate pieces, fitted together in sockets and joints at the center of the cross.  The shaft of each cross rests in a socket atop a large granite pedestal.  The base of the pedestal is square in shape (symbolizing the earth), while the upper section supporting the cross is round and carved in the likeness of a lotus blossom. 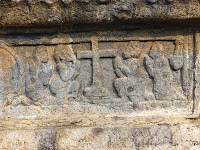 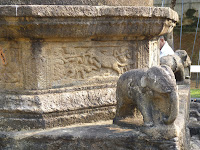 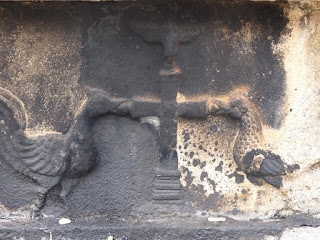 Each pedestal is carved with biblical scenes, as well as various Indian motifs including fish, elephants and peacocks.  The top two details above are from the cross pedestal at Kaduthuruthy; the bottom example showing two peacocks (?) is from the Changanacherry Cathedral.

During various church festival days and processional days, people walk around the crosses. They also burn coconut oil in small lamps as an act of reverence at the base of these large crosses, much in the same way that oil is burned at Hindu temples around stone lingams (phalluses which symbolize the Hindu deity Shiva).


The open air crosses are regarded by Saint Thomas Christians as a type of axis mundi, the connection between heaven and earth, around which all of creation turns.  Prof. George Menachery writes that "like the Egyptian obelisks the cross is a ray of the sun– Horus or Christ." 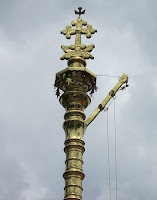 In addition to the stone crosses, some Kerala churches display a flag pole topped by a cross outside the church.  Again, this is similar to flag poles which are placed outside Hindu temples and a flag is hoisted on the primary feast day of the deity of the shrine.  The flagstaff on the left above is at Our Lady Of Snow Church, while the closeup of the flagstaff on the right is at St Sebastian's Syro-Malabar Roman Catholic Church, both in Kerala.

These flagstaffs and open air crosses are examples of Saint Thomas Christians taking Hindu worship practices, adapting them, and then applying them to Christ.

The concept of the cross as life-giving light is also found inside their churches, as they use many forms of oil lamps, including a traditional metal floor lamp called a Nilavilakku.  In the Malayalam language, "nilam" means ground and "vilakku" means lamp.  This form of lamp is typically used in the Hindu homes of Kerala. Wikipedia writes that "the Nilavilakku is integral to all the rituals and ceremonies in a Keralite's life. As dusk creeps in, young girls of the family bring the lighted lamps (nilavilakku) to the verandah of the house. In the flickering light of the nilavilakku she is joined by the children and elders of the family, especially the grandparents, in chanting hymns and evening prayers."  The Nilavilakku is also used in Hindu temples as well as during traditional wedding ceremonies.


Jyoti Sahi (1998: 26-27) offers some insights about the Saint Thomas Christians' use of the cross in Kerala:

I would propose that the way in which the early church in India apparently understood the cross as axial, in much the same way as the high crosses of Celtic tradition drew on pre-Christian cosmic symbolism, does provide us with an important understanding of the cross in relation to other faiths.  The cross is a way of re-interpreting sacred space and of connecting the Christian community with the culture of that place.  So often the cross is used by the church as a way of dividing Christians from the culture of those who are not professing the faith of the gospels– a way of setting the Christian community over and against the prevailing local cultures.

In Kerala, one feels that the cross is perceived differently, as a uniting force which helps the church to become inculturated and to root itself in the most central sympols which characterise the land.  The cross is the point of connection, of discovering the origins of our experience of sacred space within the cultural memory of the past.

I would like to finish with some observations of my own.  Regarding the Saint Thomas cross itself, it seems to me that it is largely an Eastern Orthodox emblem, whose symbolism has been only slightly tweaked by reinterpreting the watery forms at the bottom of the cross as a lotus, and therefore a symbol of India.  However, this symbolism can be seen more clearly in the open air crosses, where the lotus is explicitly portrayed (it is also used in various architectural details inside some of the churches as well).  These outdoor crosses seem to be more inherently Indian and contextualized for use by worshipers from a Hindu community, in that these crosses were not adapted from examples originating outside India. 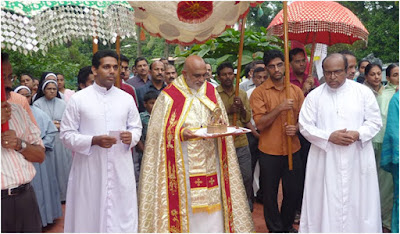 I can't really comment on the ritual uses of the crosses within the Saint Thomas tradition, since that would require more research, and frankly I'm tapped out at this point.  But that kind of information would be integral to having a more complete picture of Saint Thomas Christianity, and how the image of the cross and the gospel itself is understood within their churches, as well as by the surrounding Hindu community.  This is something that I will try to explore in a future post.  The gospel has to be contextualized wherever it is presented, both by comparison and by contrast.  Ultimately that understanding (or lack of it) is what determines whether any particular form of contextualization is successful or not.
Posted by hmsarthistorian at 11:43 PM