A Brief History of Visual Contextualization in India: A.D. Thomas

Alfred David Thomas (1907-1989) was an Anglican Indian who studied at the Lucknow Art School in Santiniketan, where he studied under Bireswar Sen and Nandalal Bose.  Sen himself was influenced by French book illustrator Edmund Dulac, who produced illustrations for children's classics such as The Arabian Nights, Sleeping Beauty, and Stories from Hans Christian Andersen, among others (his work is really great!).  Thomas later attended Visva Bharati University under Rabindranath's nephew, Abanindranath Tagore (the father of modern Indian art), and also studied in Florence, Italy.  He married in Italy and eventually moved to England where he lived until his death in 1989.


Thomas' portrayals of Christ generated a lot of debate within Indian Christian circles.  The debates revolved around whether his depictions of Christ were "too Hindu, or Buddhist, or even effeminate" (Butler, p. 130).  What "too Hindu or Buddhist" meant was that Thomas' depictions of Jesus were too peaceful, showing no hint of emotional struggle or disharmony.  In this sense, Jesus appeared too much like the Buddha, who emphasized detachment from worldly desires.  Jesus shows no struggle as he reacts to the lostness of those he came to save, or even to his own passion and death.  Almaladass and Löwner write:

That there is major opposition to such an approach is not surpising in a country, where around 80% of the Christians are Dalits (untouchables) or tribals.  The strongest critiques... felt rightly that the suffering of Jesus was not sufficiently depicted in a Christ who resembled a meditating peace-loving Buddha (p. 204).

In The Woman Taken Into Adultery, Jesus sits with eyes half closed (a Buddhist meditative practice), and a "bump" of hair on the top of his head that resembles the Buddha's ushnisha, or sign of enlightenment.  His sitting position resembles (in my opinion) the Lalita-asana position, which indicates that while he is free from the attachments to samsara, he remains to assist all who suffer.  With his left hand he draws on the ground, visually mirroring the right-handed mudhra with which the Buddha calls the earth to be a witness to his enlightenment. 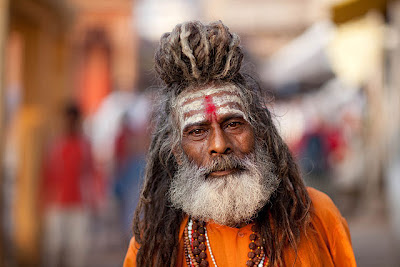 Beyond his peaceful, blissful countenance, Thomas' Jesus is represented in several of his paintings as a Hindu holy man or sadhu.  In Hinduism, "sadhu" is a common term for an ascetic or practitioner of yoga (yogi) who has achieved the first three Hindu goals of life: kama (enjoyment), artha (practical objectives), and dharma (duty). The sadhu is solely dedicated to achieving the fourth and final Hindu goal of life, moksha (liberation), through meditation and contemplation of Brahman.


In Jesus and the Samaritan Woman at the Well, Jesus sits on a low wall, with one leg hanging down, as if Krishna himself.  His blue skin reinforces this identification, although in contrast, he has a halo and his forehead glows a golden hue (a similar motif found in some of Frank Wesley's paintings).

So, what do you think about Thomas and his portrayal of Jesus?  Do you agree with his critics that his Jesus is just too detached, and resembles Buddha or Krishna, possibly confusing Hindus and Buddhists?  Or do you see them as a more authentic portrayal of an Indian Christ?


As I reflect on Thomas' art, and his critics (he did have his defenders, by the way), there are three points I would make.  First, as an artist myself, I admire Thomas' efforts to embody his faith and culture in his artwork.  As with any artist, he has a right to experiment in his art, working out his beliefs and how to portray it.  Not every result will be theologically perfect, but then none of us are, are we? 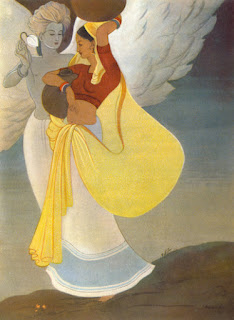 Secondly, I am reminded of the recent words of my friend, Cody Lorance, who recently commented: "Syncretism isn't the result of too much contextualization. It is the result of too little discipleship and does not require any intentional contextualization efforts in order to exist."  I think the biggest tension here might be that Christians, with proper discipleship regarding these images, would have no problem with understanding them as biblical images.  However, Hindus and Buddhists, without such discipleship, would probably interpret them based upon their own beliefs.  So the answer might rest with the intended purpose for such art: as an expression of corporate Christian beliefs for Christians, or for evangelism?  Ideally, I think the best indigenous Christian art would accomplish both.  What do you think?

Lastly, I think the images are lovely, and some of them I like very much.  But I do have to wonder (along with some of the critics): what would it look like if Jesus were shown truly struggling in the Garden of Gethsemane, or bloodied and hanging on the cross, or angry with the money changers?  Sawai Chinnawong, a Thai Christian artist, once stated that "an artist in Burma taught me that I needed to include images that are uncommon in Thai art.  Buddha is never seen suffering in our iconography, but as a Christian I have to depict the suffering of Christ, which is the hardest spiritual concept for us to understand or except" (p. 40). So suffering is a difficult thing for Buddhist/Hindu-background believers to view or portray.

Chinnawong has portrayed Christ's suffering in both figural as well as in more abstract ways.  The idea of Christ's suffering certainly doesn't have to be the first image that an Asian Christian artist tackles, but it is something to think about and ponder, as to how it could be represented.

Posted by hmsarthistorian at 9:39 PM